GEOGRAPHY AND CLIMATE OF COMOROS

The Comoros is a small group of four islands nestled in the azure waters of the Indian Ocean between the African coastline of Mozambique and the large island of Madagascar. It is a volcanic archipelago of 2,155 km² comprising Grande Comore, Mohéli, Anjouan, and Mayotte, which is administered by France.

Grande Comore (Ngazidja, in the local language), is the largest and most western island. With an area of 1,148 km², it is the youngest of the archipelago. Mount Karthala is still an active volcano rising to a height of 2,361m and having erupted most recently in 2006. It is home to the nation’s capital city, Moroni.

Anjouan (Ndzuwani) is older than Grande Comore and is in the shape of a triangle. With an area of 424 km², Anjouan has three mountainous ridges, with the highest point being Mount Ntringui at 1,575m. Mutsamudu, on the northwest coast is the capital and largest city.

Mohéli (Mwali), at 211 km², is the smallest island of the archipelago. It has a central ridge of around 750m elevation running the length of the island, with thickly forested slopes descending to numerous beaches and coves. Just off the south coast of the island are a number of uninhabited islets with deserted white-sand beaches and surrounded by beautiful coral gardens. Its capital and largest city is Fomboni, on the northern coast.

Comoros’ location 12 degrees south of the equator gives it a warm tropical climate, making it possible to visit year round. It has a maritime tropical climate with two main seasons: the wetter, warmer season, from December to April, and the drier, cooler season from May to November. Daytime temperatures average about 31°C in the summer months and 27°C in the cool season, with overnight temperatures about 8° less. The cooler season is the most popular time to visit, but no matter when you come you will always find warm weather and smiling faces in Comoros. 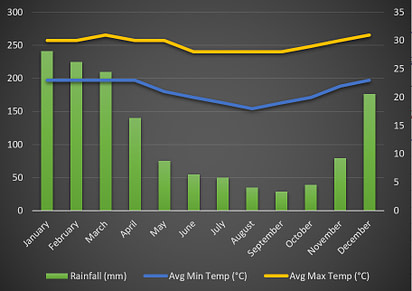