Come Discover the Culture of Comoros

Over the centuries, diverse peoples have come to the islands of Comoros to form the complex and beautiful cultural mix seen today.

In Comoros, you will often find men wearing the kandu with a kofia on their head while women wear the boubou, shiromani, salouva or bwibwi.

The kandu is often embroidered on the collars and sleeves and the kofia, a small white cap, is adorned with elaborate embroidered patterns made with golden threads. Local women can often be seen sewing kofias while sitting in the market or on their doorsteps.

Coming from the island of Anjouan, the shiromani is a large traditional and colourful cloth with beautiful patterns that covers almost the entire body of Comorian women. They wear it daily, at work or during a ceremony, often with their faces adorned with ground sandalwood paste. The salouva, a large piece of fabric tied at the chest, is an elegant traditional dress, mainly worn by women in Anjouan and Mohéli. The boubou is a simple dress worn by many women in everyday life, while the bwibwi is the local name for the burkha. 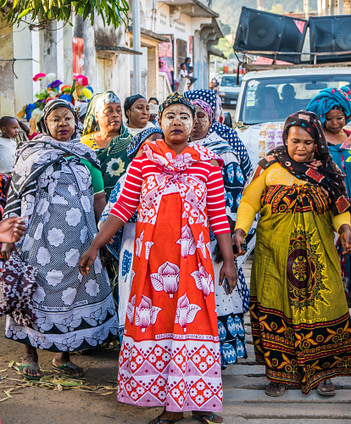 The official state religion is Sunni Islam. This is reflected in the society with multiple mosques, calls to prayers, religious celebrations, and the way men and women dress. Although Comorians are tolerant toward other cultures, moderate behaviour is expected from non-Muslim visitors, such as modest dress and no consumption of alcohol in public spaces.

The commonly spoken languages are Comorian (a blend of Bantu and Arabic, similar to Swahili) and French, with some people also speaking English and Arabic. Each island of the archipelago has its own dialect of the Comorian language: Shingazidja is spoken on Grande Comore; Shindzwani in Anjouan and Shimwali in Mohéli. We have assembled some common phrases that will be useful for your stay in the Comoros. 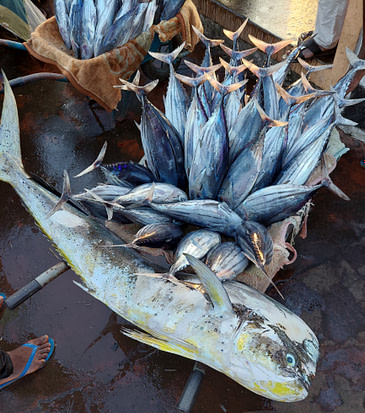 The cuisine in Comoros abounds in foods with diverse scents and flavours. Influenced by African, Arabic, Indian and French cultures, among others, its cuisine is a delightful fusion of dishes with rich tastes and aromas seasoned with spices like cardamon, cinnamon, turmeric, cloves, and vanilla. Coconut milk from freshly grated coconuts is also an important ingredient. Fresh fish is available in abundance and is served in almost every meal accompanied with staple dishes like breadfruit, green bananas, cassava, sweet potatoes and rice. Its specialties include madaba (cooked cassava leaves in coconut milk), ndrovi ya nazi (cooked green bananas with fish and coconut milk), pilao (spiced meat and rice dish) and mkatre wa foutra (grilled bread prepared with coconut milk).

The “Grand Mariage” (literally “big wedding”) is an age-old tradition and is a fundamental aspect of the culture of Comoros, particularly in Grande Comore. Each of the islands has its own name for the “Grand Mariage”: the one of the Grande Comore is known as anda and in Anjouan and Mohéli it is called harusi. When they reach a certain age, all men born on the island are expected to perform the “Grand Mariage”, allowing them to be promoted in the social hierarchy and reach the status of “notable”, a person of high social standing.

The anda lasts nine days, with different ceremonies on each day, while the harusi in Anjouan and Mohéli is usually shorter. During the festivities, women in their colorful traditional outfits, adorned with flower necklaces and gold jewelry, and men in their boubous, perform various dances interspersed with prayers and speeches. Traditional dishes and cakes are served and every attendee goes home with a “sachet” of drinks and snacks.